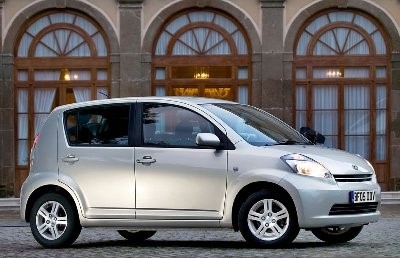 The Sirion, developed on the same platform that would later be used for the Toyota Yaris, was born as the heir to the Charade and is only offered with a five-door body and dimensions that place it in the segment B in the European market.

Like all of Daihatsu's small cars, the Sirion has a front or all-wheel drive chassis with MacPherson-style independent front suspension and torsion rear axle on the front-drive model and three-link Multilink on all-wheel drive (the same scheme used by the Cuore 4WD of the time).

Submitted to the Euro NCAP crash test in 2000, it obtains 3 stars.

For the Asian market, the car was also available with a 3-cylinder engine of just 900cc capable of 120 horsepower through the use of a turbocharger. The latter was also used in the Japanese All-Japan Rally Championship, where it was called

The second version (M3_), is a car which since 2005 has had some success also in Italy, also continued its restyling (M6_), offered until 2015 with good sales figures.

Over time, this can present problems with the electric steering column, and the signals are unequivocal:

In the garage, the most frequent fault codes that can be detected by the self-diagnostic kit are as follows:

QUALITY OF COMPONENTS
• The EPS are completely reconditioned, with original parts and are supplied with torque sensor and always new galvanized parts.

TESTING
• Di.Pa.Sport has based is activity on the knowledge of automotive electronics.
This technological know-how has enabled us to develop dedicated test benches capable of simulating behavior in the car.
Each revised EPS is individually tested and calibrated before being approved for marketing, to ensure like-new quality

The warranty period on remanufactured part is 1 year

RELIABILITY FOR THE REPAIR PROFESSIONAL
• The EPS is already calibrated, ready for assembly, the repairer will not have to reprogram the part at the dealership.

RELIABILITY FOR THE SPARE PARTS DISTRIBUTOR
•The “fast mover” steering columns are alwaysl available at Di.Pa.Sport's state-of-the-art fully electronic managed warehouse, and with the new delivery system we have developed, we are happy to receive the order in the morning and deliver the item already in the afternoon (for the Italian areas covered by this service)